The town of Giardini Naxos is considered one of the oldest urban civilization in the West, being the first Greek colony in Sicily, founded in 734 BC from Chalcidians of Euboea. The natural characteristics of the creek, between Cape Taormina and Cape Schisò, turned the city into the natural seaport for Greek ships. 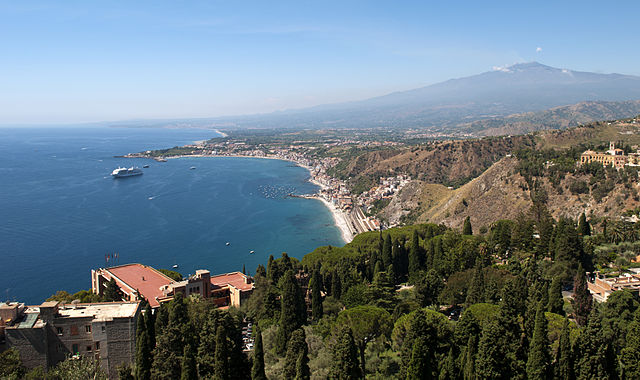 Today it is possible to visit the ancient Archaeological Park and Museum, which proudly retains the walls of lava rock at the temenos and the furnaces for firing terracotta artifacts from the Archaic period to the Late Roman and Byzantine, silver coins and many other artifacts that tell us about the life in this area from the 7th century BCE until our days.

In the beautiful tourist area of the Ionian Sea it is also possible to visit the Museum of Natural History, where you can admire collections about mineralogy, palaeontology and marine biology, and even a section dedicated to the ecosystems of the river Alcantara, one of the most important parks of the island.

Giardini Naxos is a popular tourist destination in southern Italy and logistically well prepared. From here, in fact, it’s easy to reach equally renowned locations such as Taormina, Mount Etna, the Aeolian Islands and Syracuse.

The Italian town of 9,400 inhabitants is located in the province of Messina, just 5 km from the renowned City of Taormina. Easy to reach by highway (A18), it is 50 km south of Messina and 48 km north of the airport of Catania Fontanarossa (CTA).